This article contains information that is not suitable for kids. If you have kids, keep them away.

It was night time, and Rarity was sleeping.

“Oh, hi Rarity,” Sweetie Belle angrily walked in, as if she had just been woken up.

“Don’t pull any of your crap,” Sweetie Belle snapped. “I know what you do in your spare time.”

“Well whatever could that be...?” Rarity asked as if she was confused.

Sweetie Belle got closer to Rarity, and then whispered in her ear. “I know you rape me at night.”

“Rarity, don’t act like you don’t know,” Sweetie Belle walked over her in circles. “You think this is a damn game? Of course you rape me. Late at night, parents are gone, nobody’s there, you bucking rape me.”

Sweetie Belle stopped talking for a second, calmed down, and then out of nowhere started yelling.

“RARITY, YOUR A GODDAMN SICK FUCK! YOU WILL PAY FOR THIS... and I think I just know how. Heh heh...”

“Oh, and what are you going to d-do about it?”, said Rarity, not keeping the act anymore.

Sweetie Belle slowly walked away, laughing evilly as Rarity got a chill in her spine. She then told herself it was just a dream and she never knew that she raped Sweetie Belle, put a cover over her, and went back to sleep.

It was morning, and Rarity had woken up. She yawned and tried to get rid of that “dream” she had, only to realize it WASN’T a dream, at all.

Sweetie Belle walked in Rarity’s room again, this time looking creepier than before. She was wearing a red suit with a star that supports Satan, and no eyes or mouth. 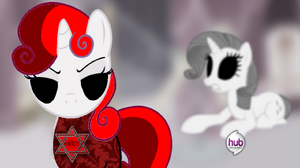 “You haven’t FORGOT, have you, sister?” said Sweetie Belle in a deep voice.

“Oh, Rarity, my dear sister, being raped for, hmm... I’d say 8 years does this to you,” She then pulled out a knife from her suit.

“Now what should I do to you... I think I’ll put an end to your misery,” She then whispered, “And my misery.”

Sweetie Belle rolled her eyes. “Rarity, there’s no going back now,” the little filly stated. “Today’s the day I bucking kill you for good. Who knows who ELSE you’ve raped?”

Sweetie Belle first chopped off Rarity’s horn with her knife. “Won’t be needing THIS anymore...” She then started sucking on it, teasing Rarity.

“Oh, too much for you? Fine...” The little filly was thinking of other ways to torture the poor mare.

She then started to rip off her living organs leaving no more trace of her.

Sweetie Belle then smiled evilly at the fact Rarity was dead.

She then crossed out her name on her Death List, and went to her Cemetery, where she had killed a million mares and stallions, to hide her dead body.

As Sweetie walked herself home, she looked over her Death List.

She knew who to brutally murder next.

Retrieved from "https://mlpff.fandom.com/wiki/Rarity%27s_Secret?oldid=5114"
Community content is available under CC-BY-SA unless otherwise noted.